Audience members fill out "Just Ask Kirk" cards at the concert. Conductor Kirk Muspratt  answers every question from the stage, by email or in his  monthly column. Got a question?  Click Here 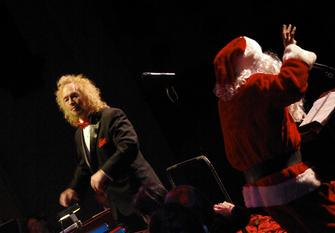 Click here to read the columns from The Times

Kirk Muspratt, Music Director/Conductor of the Northwest Indiana Symphony Orchestra, was recently named a "Chicagoan of the Year" by music critic John von Rhein and the writing staff of the Chicago Tribune. In honoring Kirk, von Rhein said, "Ask the delighted adults and kids who flocked to his concerts...with the Northwest Indiana Symphony Orchestra...They will tell you he made concertgoing an interactive experience that was both enlightening and - are you ready? - fun."

Recognized as one of the outstanding figures in the new generation of conductors, Kirk Muspratt has garnered international critical acclaim and was hailed as a “born opera conductor” (Rheinische Post) and “a knowledgeable musician who delivers superbly controlled, gorgeously shaped readings” (St. Louis Post-Dispatch), and the Los Angeles Times declared "Watch him!"

Kirk Muspratt begins his 19th highly-acclaimed season as Music Director of the Northwest Indiana Symphony Orchestra. He has instituted several highly commended programs that include a popular Solo Competition for Children that results in a child performing at almost every Northwest Indiana Symphony concert. He has also implemented an Orchestral Fellowship Program with Valparaiso University and his vision was instrumental in founding the South Shore Summer Music Festival.

One of his most highly praised new projects at Northwest Symphony Orchestra has been the innovative collaborations with the Lyric Opera Center for American Artists. Together they have presented La Traviata, Die Fledermaus, Carmen and La Boheme.

In order to involve the community to the maximum, Kirk has created "Just Ask Kirk™" cards for audience members’ questions, “Interactive Intermissions” and “Cookies with Kirk” for patrons and musicians of the orchestra, chorus and youth orchestra to meet, and a "Kirkature™" cartoon to help advocate the credo: "Symphonic music is for everyone." Kirk also writes a monthly column for The Times.